This paper reviews the development of the WLAN standard IEEE 802.11 and judges its development trend. Combined with the new requirements for RF units in specific applications for WLANs in smartphones, NXP will provide new RF solutions that fully meet the RF requirements of the latest WLAN standards. Since 2010, the smartphone market has grown steadily. Smartphones generally provide a wireless local area network (WLAN) connection, which provides a broad market prospect for WLAN radio units. Since the release of the WLAN standard in 1997, in order to improve the transmission rate and throughput, the physical layer protocol has been supplemented, and new requirements have been placed on the operating frequency, performance and complexity of the radio unit.

Wireless Local Area Network (WLAN) is a local area network connection based on the IEEE 802.11 standard and using free ISM band RF resources. The first version of IEEE 802.11 was developed by the IEEE in 1997, which defines the media access control layer and the physical layer. The physical layer defines an ISM band with a working frequency of 2.4 GHz, and the total data transmission rate is 2 Mb/s.

In 1999, IEEE 802.11 added two complementary versions of IEEE 802.11a and IEEE 802.11b, where IEEE 802.11a defines the ISM band at 5 GHz with a data transmission rate of 54 Mb/s; while IEEE 802.11b still operates at 2.4 GHz. ISM band, but the transmission rate can reach 11Mb/s. In 2003, the IEEE supplemented the physical layer of WLAN and released IEEE 802.11g. This version still uses the 2.4GHz band, but the transfer rate is increased to 54Mb/s. In 2009, the IEEE renewed the physical layer and introduced IEEE 802.11n. The standard supports both 2.4GHz and 5GHz bands, and can use double bandwidth of 40MHz to support Multiple Input Multiple Output (MIMO) technology. In theory, its highest transmission rate can reach 600Mb/s (this rate must meet 64QAM modulation, 5/6 encoding rate, 40MHz channel bandwidth, 400ns guard interval, 4 spatial streams, and each stream). The rate is 150 Mb/s).

In addition, in order to achieve higher data throughput, the WiGig organization merged into the WiFi Alliance in 2013. WiGig is committed to promoting the IEEE 802.11ad standard, which uses the 60 GHz band to provide short-range wireless communication services with transmission rates up to 7 Gb/s. Since the 60 GHz signal cannot penetrate the obstacle, when the terminal device enters an area that cannot be covered by the WiGig signal, it will automatically switch to the lower frequency band, but the transmission rate will drop drastically.

Table 1 summarizes the evolution of the IEEE 802.11 standard, from which it can be seen that each upgrade and supplement of the WLAN standard is nothing more than a transmission rate/throughput. In order to achieve this goal, the following two methods can be used. 1. Adopt a wider channel bandwidth. To achieve this, it is sometimes necessary to increase the operating frequency band. As a result, WLANs have moved from the initial 2.4 GHz to 5 GHz, and the 60 GHz standard has emerged, allowing for wider spectrum resources. 2. Adopt spatial multiplexing technology. Starting with IEEE 802.11n, MIMO technology was introduced into WLAN, and the maximum spatial stream was also increased in IEEE 802.11ac.

Since 2010, global smartphone shipments have grown steadily. As expected in Figure 1, by 2017, global smartphone shipments will be close to 1.6 billion units per year. In smartphones, due to process differences, mobile phone main chips usually do not integrate WLAN RF circuits. For the main chip, the WLAN RF circuit belongs to the peripheral chip, as shown in Figure 2. The continual improvement of the WLAN standard requires that the WLAN RF circuit be back-compatible with IEEE 802.11a/b/g/n in addition to the requirements of IEEE 802.11ac for 5 GHz. In addition, it must also be compatible with the 2.4 GHz WLAN standard. Frequency Bluetooth (BT) coexistence. 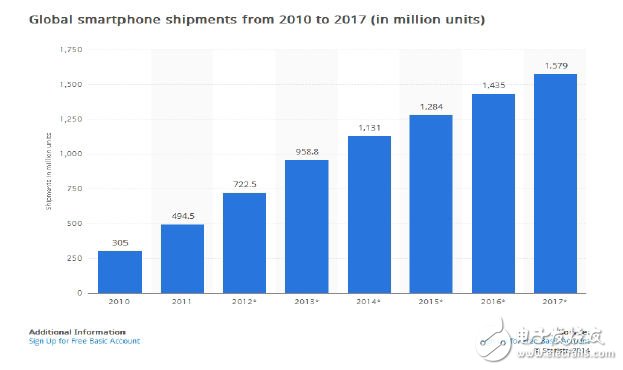 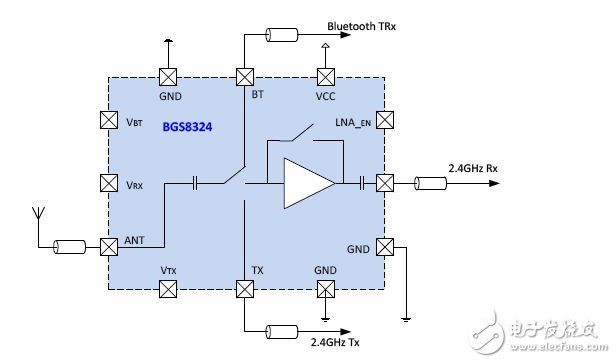 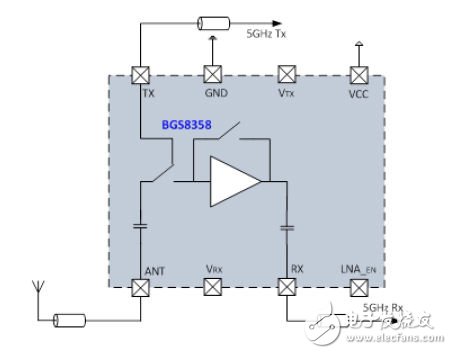 The BGS8324 is a WLAN receiver front-end chip operating in the 2.4 GHz band. It supports IEEE 802.11b/g and IEEE 802.11n 2.4 GHz band, while taking into account the coexistence of Bluetooth. The product is available in 2mm & TImes; 2mm QFN package, eliminating the need for external matching devices, featuring small size, low power consumption, and simple design. The chip supports 2.7V to 6V, with four modes of receive amplification, pass-through, transmit and Bluetooth, and built-in anti-blocking function for 5.8GHz coexistence signals.

The BGS8358 is a WLAN receive front-end chip that operates in the 5 GHz band and supports IEEE 802.11a/ac and IEEE 802.11n 5 GHz bands. The chip uses 1.5mm & TImes; 1.5mm QFN package, also does not require external matching devices, with small size, low power consumption, simple design and so on. The chip supports 2.7V to 6V, with three modes of receive amplification, pass-through and transmit, and built-in anti-blocking function for 2.4GHz coexisting signals.

This paper reviews the evolution of the physical layer standard IEEE 802.11 of WLAN, and analyzes the trend of the standard revision of the standard through the increase of working bandwidth and the use of MIMO technology. Considering the widespread use of WLAN in smartphones, NXP Semiconductors has introduced the BGS8324 and BGS8358 products for smartphone WLAN radio solutions to comply with IEEE 802.11a/b/g/n/ to meet the latest WLAN standards. Ac various standards, at the same time, also take into account the coexistence of Bluetooth in the 2.4GHz band. These two products have the advantages of small size, low power consumption, and simple design, and have broad market prospects.

LED Emergency Driver has been widely used in LED lamps , which can be used not only as an emergency when the power grid is off , but also as an energy saving use . The housing material of LED emergency power supply is divided into aluminum alloy housing , stainless steel housing and ABS housing . The Led Emergency Kit is suitable for LED lights of different powers to be used at AC85-265V wide voltage , and equipped with high quality rechargeable lithium ion battery . It has a wide range of applications such as home , commercial buildings , offices , hospitals , schools etc .