First, the origin of the problem

There are currently two types of light engines on the market, one is a high-PF but severely flashing electroless capacitive light engine, and the other is a flashless, low-PF electrolytic capacitor light engine. So which kind of light engine is better?

ExClara, a company in Silicon Valley, invented an LED system. In order to improve the power factor PF, not only the electrolytic capacitor was removed, but also the LED string was divided into several groups and turned on in order to completely match the current waveform and the voltage waveform. . The result of this must be that the LEDs are intermittently illuminated and produce severe flicker.

Third, the degree of flicker

LEDs originally need to have a certain starting voltage (2V or more) to turn on. Now it is necessary to wait until the input voltage rises to a certain height before turning on. This will inevitably make a big between the two half sine waves. The dark area (see the arrow area below) makes it much more flicker than other fixtures (like incandescent, fluorescent). 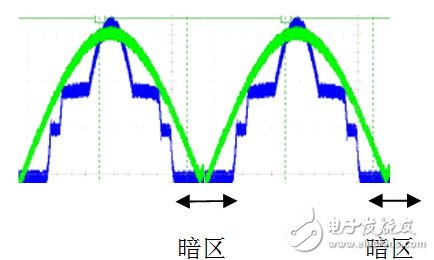 Fourth, the consequences and problems caused by flicker

1. Impact on the human body:

Â· can cause seizures in patients with photosensitive epilepsy;

Â· Workers who require vision and vision can cause a decline in performance;

â€¢ For workers who use or contact rotating machinery, the effect of slowing, stopping, or even reversing will occur, which may lead to work-related accidents.

For athletes who play at extremely high speeds such as table tennis badminton, there will be 2ms of darkness every 1/100th of a second. This kind of flashing of lights often causes problems such as misjudgment of the direction of the ball.

Â· Leaves streaks on the photo;

Â· A long face will be generated when the lens is moved for a long time.

The flashing of the lights has a bad influence on the production quality of the film and television dramas, and there are ghosting and interference streaks that cannot be played.

6. Impact on security and security systems

Because the camera's camera moment may be just when the light is dark, it is possible to take a full black image, that is, lose a complete frame. If this frame happens to be the moment of the mob, then it loses an important piece of evidence.

Emergency LED drivers are designed specifically for light fixtures . These emergency backup drivers regulate the power supplied to the LED fixture the same way normal drivers do , but they operate off of a battery instead of line voltage . Because they operate off a battery the light output isn't as bright as the fixture normally would produce , but it will be just enough in an emergency situations . Most of our emergency LED drivers have a maximum emergency operation time of 120 minutes .