In recent years, mobile devices have developed rapidly, LED technology is changing with each passing day, and the combination of the two has detonated a new market - intelligent lighting.

As part of the smart home, intelligent lighting allows users to gain more autonomy and convenience in terms of lighting brightness, control, etc., while benefiting from the properties of LEDs greatly reduces power consumption, which has many advantages for this type of product. The world has been popular with the market. More and more manufacturers are reaching out to the field. The traditional lighting manufacturer Philips Hue and the domestic emerging Xiaomi Yeelight are among the best.

In addition to focusing on intelligence, intelligent lighting, as a lighting product, needs to focus on its reliability, so it requires semiconductor manufacturers to escort. Dialog Semiconductor, as a supplier of solid-state lighting driver control chips, has a full line of driver products and benefits from its rich experience, and believes it can do what they say â€“ focusing on cost-effective drive control products. Do the leader in the field of dimming. 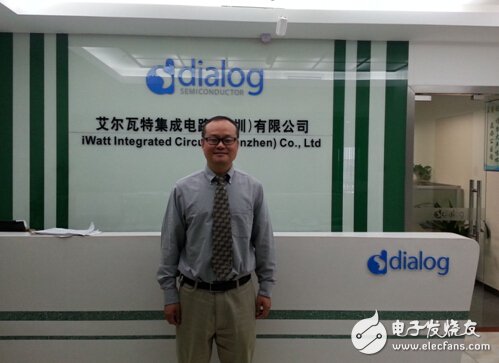 Yan Liang, director of power conversion marketing at Dialog Semiconductor Co., Ltd., said that with the experience of mass production in consumer, Dialog has accumulated a lot of experience to provide customers with high quality lighting: whether it is stroboscopic, dimming range, or tune Dialog can do a great job with light experience and zero-ripple output.

We know that the LED dimming control method on the market, thyristor accounts for a large part of the market, and is in a leading position for a long time in the future, so Dialog continues to pay attention to this aspect. In addition to this, Dialog also focuses on a variety of dimming methods such as PWM, wireless, power line carrier and 0-10V analog controller to meet different dimming requirements.

According to Yanâ€™s director, Dialog currently has a wide portfolio of dimming patents, and its dimming depth can reach 1% to 100%. In addition, the power range of LEDs can cover 3 to 45W, and high power and digital fault tolerance are taken for granted. of.

When it comes to dimming, Dialog's current promotion of Ledotron is a beautiful landscape. This is a digital dimming protocol based on power line using baseband modulation technology driven by companies such as OSRAM. It can solve all compatibility problems of phase-cut dimmers, no audio noise, no reliability problems, no dimming And other issues.

Director Yan also said that the Ledotron dimmer is very easy to install and control, and the brightness and color temperature control of the LED replacement bulb can be greatly expanded by means of addressing, color control and adjustable white function. Regardless of the model and manufacturer, dimmers and bulbs with the Ledotron logo ensure interoperability.

Moreover, in terms of intelligent dimming, the Ledotron dimmer can support up to 30 LED dimming bulbs, limited only by the output power of the Ledotron dimmer, and the communication between the dimmer and the bulb passes through the AC mains voltage zero crossing. Baseband data modulation implementation.

In addition, Dialog's adaptive over-temperature protection is also worth mentioning.

Practitioners in the LED industry know that excessive temperature can cause damage to LED drivers and LED chips. Therefore, how to over-temperature protect them is a hot spot in the industry. Dialog's products can reduce the power when the temperature is too high, which effectively extends the life of the LED; while the 15% amplitude LED power adjustment does not cause significant brightness perception changes, so in the process of power reduction The user experience is guaranteed.

When asked about the characteristics of the Dialog LED driver circuit, Director Yan Liang said that whether it is phase-cut dimming or matching intelligent dimming applications, Dialog drive technology will go in the direction of simplifying the drive circuit and reducing the overall BOM cost. Its newly developed driver products "use single-winding and single-MOS structures to achieve high-compatibility dimming performance with the industry's simplest phase-cut dimming flyback circuit."

LED driver power not only accounts for a large part of the cost of LED products, but also the biggest cause of LED problems. Therefore, a new concept of â€œde-energizationâ€ has emerged on the market, that is, the switching power supply in the LED driver has been removed. When asked about the Dialog's plan, Yan said that AC LED has its right application area, but at present it is not the mainstream choice. "If you adopt the above method, you need to solve the ripple problem, anti-strobe and radio wave instability problems." Yan said. "So I think LED with drive is the current direction of development." Yan said.

Control circuit and RGB  chip is integrated into a 5050 packaged component to form a complete external control pixel.

The three primary colors of each pixel can achieve 256 levels of brightness display, serial cascade interface,

and can receive and decode data through signal lines. The color of the light is highly consistent and cost-effective.

Led Pixel Screen, LED shaped screen and so on. It is one of the most common ribbons on the market.