Today, people are increasingly shooting through smartphones, tablets, digital cameras, camcorders and even cars. Image jitter is often encountered during camera recording. A typical example of jitter is when a person shakes the camera and shakes the image, making it difficult to view, especially when the zoom function is fully zoomed in. In addition, blurring can occur when the camera and camera capture images while moving. Therefore, designers need to use appropriate image stabilization methods to help control jitter and blur during camera and camera, optimizing the user experience.

This article refers to the address: http://

In contrast, EIS uses gyroscopes to detect camera motion and compensate motion in real time, maximizing pixel and image quality. Both methods provide motion compensation by cropping the image. Since the EIS uses a gyroscope to sense motion, the EIS sensing accuracy is excellent, but since it still compensates for motion by cropping the image, the image quality is degraded. In Figure 2, you can see how the guard band is used to crop the image to compensate for the jitter. 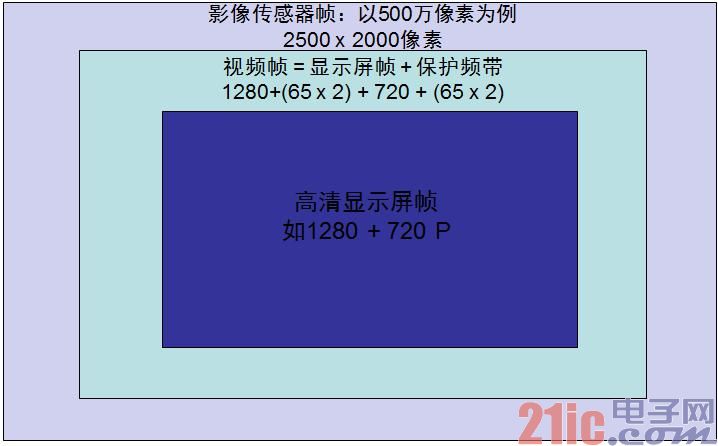 Most applications use an application processor (AP) to process video or signals, including applications that use EIS and DIS. In particular, DIS requires more processor resources to compensate for jitter and motion. In video applications, video compression is equivalent to image quality. When methods such as DIS and EIS need to crop an image, the image quality will be degraded because the quality of the captured image is continuously reduced and improved.

In contrast, the OIS method captures and uses the largest pixels and does not require a guard band to reduce/improve image quality, providing maximum compression and optimized image quality. And because OIS provides internal compensation, no other application processor resources are needed. 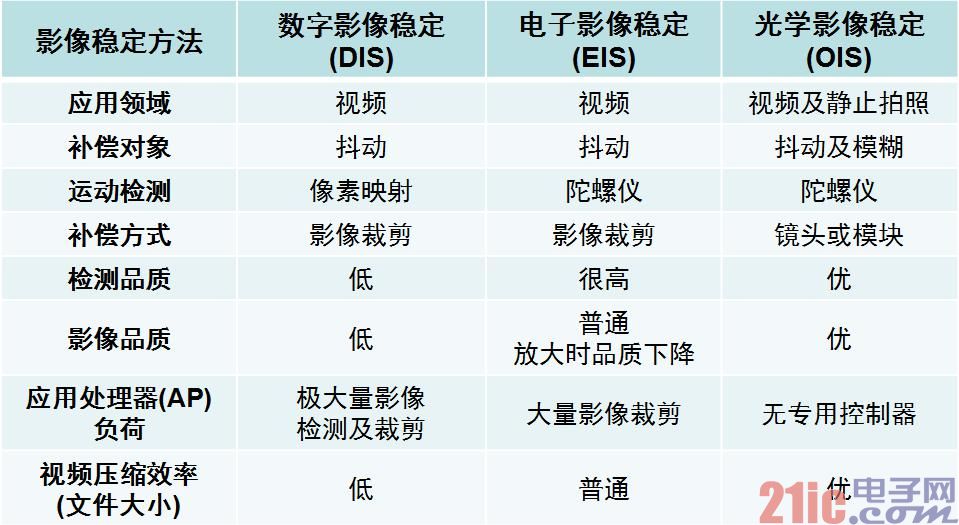 Other advantages of the OIS approach

In addition, the unique OIS method offers a greatly improved shutter speed and optimized exposure compensation up to 3 levels, much higher than other methods used. The OIS scheme is usually composed of some main components, including an image sensor that determines the focal length, a gyroscope that compensates for motion, and optical image stabilization. These components can be assembled in a small space and routed using some standard design.

ON Semiconductor has developed a solution that combines the best features of these possible choices, namely the LC8981xx series of optical image stabilization controllers and drivers, including LC898111, LC898119 and LC898122. Among them, LC898111AXB-MH is a new OIS solution from ON Semiconductor. It is the industry's most accurate optical image stabilization controller and driver for smart phone camera modules. The LC898111AXB-MH delivers industry-leading accuracy and low power consumption in a compact size (2.57 x 3.22 x 0.69 mm). The LC8981119 is further reduced in size to 2.0mm X 2.0mm X 0.675mm and offers extremely low power consumption, samples are now available. The LC898122 further integrates closed-loop autofocus to provide a more powerful solution. 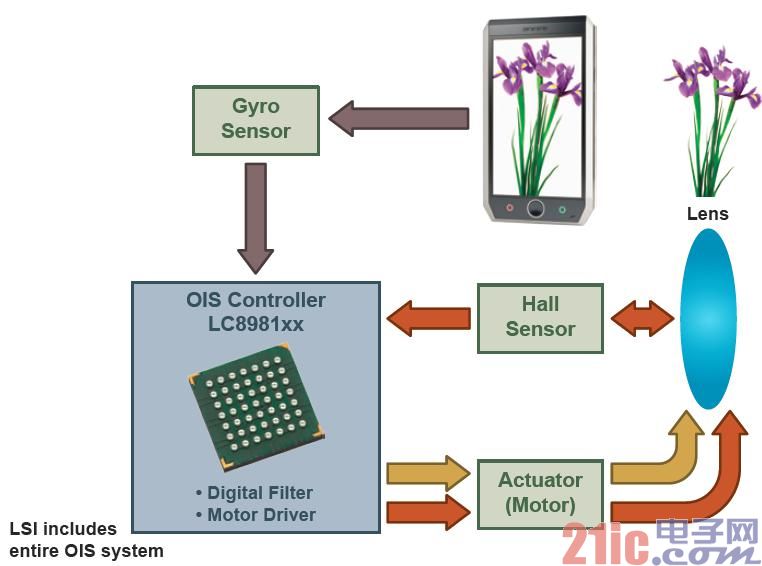 Figure 3. An example of the optical image stabilization control and driver operation of the ON Semiconductor LC8981xx series.

Figure 3 shows the working diagram of the ON Semiconductor LC8981xx series. At initialization, this series of solutions will center the lens. The gyro sensor detects angular rate disturbances caused by hand shake, while the OIS controller compensates for instability by converting the angular rate to a travel distance and serving as a reference signal, while the controller is assisted by the actuator. Move the lens down and use the Hall sensor to detect the distance traveled to provide feedback.

Taking the LC898111AXB-MH as an example, this new device combines the controller and driver functions required to process OIS in a smartphone camera module. The significantly increased shutter speed makes exposure compensation far superior to competing OIS solutions. Therefore, it can achieve precise suppression control of camera picture shake. In addition, it can also be used to achieve the left and right and up and down adjustment functions that are indispensable for shooting while walking. The output of this IC's integrated pulse width modulation (PWM) driver reduces power consumption and mitigates the effects of noise on image quality. This highly integrated, pre-programmed IC allows engineers to minimize the number of external components required in system design, thereby reducing overall energy consumption and board space. 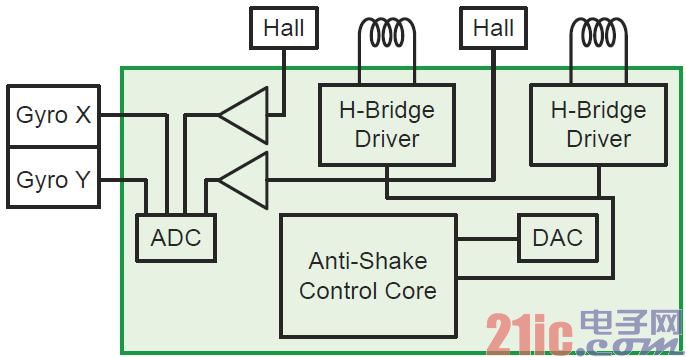 The LC898111AXB-MH includes a variety of digital and analog audio processing mechanisms, including dual-channel position sensing circuitry, gyro filter interface circuitry, and lens servo circuitry. The position sensing circuit includes a Hall amplifier circuit, a constant current digital-to-analog converter (DAC), a gain control operational amplifier, and a 12-bit analog-to-digital converter (ADC) for each channel. The gyro filter interface circuit is fully compatible with analog and digital signals. The gyro filter interface and lens servo circuit can be adjusted through I2C and SPI bus interface, and can provide various configurations when connecting different gyros and actuators. As a result, the device can cover a wider range of jitter frequencies and thus provide a larger image stabilization angle.

ON Semiconductor built a demonstration device based on the LC898111AXB-MH. The comparison test shows that with the ON Semiconductor OIS solution enabled, the image becomes more stable and smooth without affecting image quality. (see demo video for details) 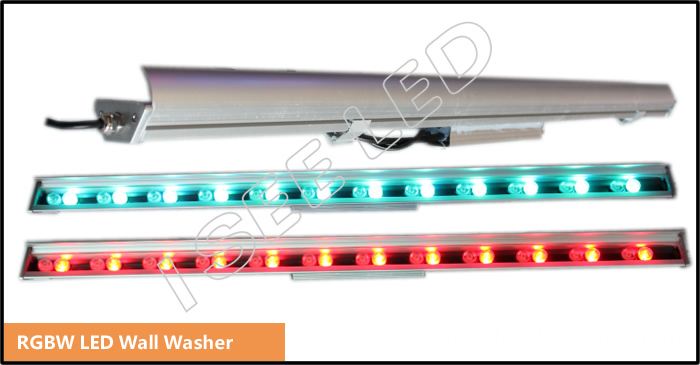